So now we are all up to date

Back to 2nd February

The journey to Giselle's goes without incident

Neal knocks on the door and can't believe his eyes when Giselle opens the door..... talk about  cliché!

"WOW! Harry's got his work cut out with you!!!! Bare foot and pregnant!!! You look gorgeous sis, how are you feeling?" Neal gives his sister a hug.

" Not quite finished with the decorating then?"he asks "I thought it was all systems go before you hatch?"

Giselle hits him playfully on the arm " Yes, that was before Harry got more involved!

He's just sacked the guys that were working on the place... said they were not working fast enough! So now he buggers off to France and we have no one to finish the house!!!" *sigh*

"So have you heard from Harry yet?"

Giselle winces " Yes! about twenty times!!! The guy is driving me NUTS!!! You would think I was the only person to ever have a baby!"

Neal smiles but Giselle can see the flicker of sadness that shows fleetingly on his face.

"Harry's, a lucky guy" Neal says after a pause.

"I'm sorry, this must be hard for you! How's Sarah?" Trying to sound like she cares (she liked Sarah at first but after she walked out on Neal and he was so devastated....)

"Not very well actually! Her sister Kandy is staying with her for a couple of days, I think she's got a bit of a tummy bug! I phoned her on the way over in the taxi she says she's feeling a lot better but? ....."

After closing her lap top Giselle rolls out of her seat "where's my manners? Would you like a drink or anything?"

"A cup of tea would be nice" Neal looks towards the lap top "So what you been up to sis? Looking for yet more baby stuff?"

"No, actually! I was looking for builders...and what do you mean 'more baby stuff'??Has Harry been talking?"

" As my good friend Kumi is want to say I'll squish his beanbags when I see him!" Giselle giggles.

Neal laughs uncomfortably and feels the need to cross his legs " and how is that nutty chick and poor Simon? Still together?"

Neal follows Giselle into the kitchen and helps her with the tea.

Then they return to the living room and settle down for a looooong chat about there old friends, respective partners, Giselle's baby and a ton of other things......

If you want to find out more about Kumi, Simon, Kumi's sister Yuri and her husband Lukas who live in Sin City link below

Sin In The City 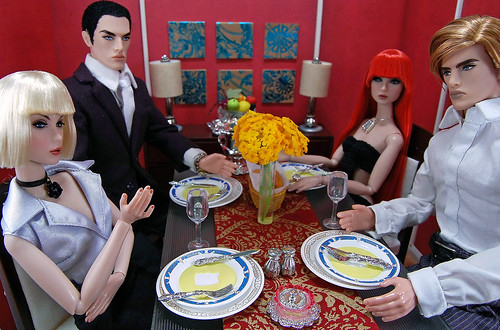 2nd February about 11 o'clock in the morning

So now we go back to Sarah who as you remember is laying in her bubble bath.....

"SARAH ARE YOU GETTING OUT ANY TIME SOON??"  Kandy shouts through the door

With that she grabs her towel and starts to dry herself and get dressed glancing in the mirror she thinks to herself that she must stop with the cream cakes every time Kandy comes to call!

Neal's just as bad always buying her favourite chocolates she's started to put on weight her clothes are getting a bit snug and even her boobs are looking  bigger!

When Sarah joins Kandy in the living room Kandy has a cup of tea made for her and.... yes, a yummy looking cream cake sits on the plate next to her cup!

" Are you and Neal in cahoots or something? What is it with you two trying to get me FAT?" Sarah grins.

"Well you don't have to eat it if you don't want to!" Kandy replies and with that snatches the cake up and takes a bite!

Sarah's laughs as Kandy sits there all indigent with a large blob of cream on her nose.

"That's it laugh at me, why don't you!" Kandy splutters back at her and the both start to laugh even more.

Sarah hands Kandy a tissue to wipe her nose then suddenly her expression changers and she has a shape intake of breath "OACH!!! Now I've got a pain in my side, Darn you making my laugh so much you've given me a stitch!"

Kandy instantly serious "Are you OK?"

"Yes, of course I am! It's only a stitch" Sarah replies

"Well if your sure?" Kandy says with a look of concern on her face

"Don't fuss your getting more like Neal by the minute" Sarah admonishes her.

The girls sit quietly for a while then Kandy asks the question she has been wanting to ask for oh sooooo long.

"Sarah what happened with you and Neal? How did you meet? Why did you leave him?"