This Episode Is Dedicated To The Memory Of Joe Tai. All Female Footwear Designed By The Late Joe Tai

After a few days Sarah is well enough to have the ventilator removed. The doctor had kept her sedated while she was on the ventilator but now as the sedation wears off and as she starts to come back it's evident she has no memory of what happened to her from after the shooting.

So who is going to explain to Sarah what happened?

The family talk for hours but in the end decide it would be best to not tell her... at least until she is stronger anyway.

Then it will be how much to tell her? They know she will be totally devastated.

Sarah with no understanding of what has happened is distressed and cries for Neal and her children, once again her family are at a loss. In the end Rumi tells Sarah she can see the children as soon as she is out of ICU (Intensive Care Unit) Rumi then tries to distract her with the revelation that first Jed is back in their lives.... Sarah is overcome at seeing her long lost brother again and has no memory of him being back in their lives for the past six months.

Jed is amazed at how different this shy vulnerable woman is the the one he had got to know.

Even though he had been watching the 'old' Sarah for some time (before Dania shot her) he had not been up close so other than the childhood Sarah the sex maniac Sarah was the one he was accustomed to.

The next day they feel it's time for the second revelation. Rumi, Kandy and Jed explain that they felt it was time to forgive their father and that he wanted to see Sarah.

At first Sarah is reluctant but in the end agrees under proviso that Rumi stays with her when Stephen visits.

The following afternoon it time for Stephen's visit. As agreed Rumi is there to support Sarah who is now well enough to be moved from ICU. She still has no idea why Neal... or any of his family have not visited and Rumi is fast running out of excuses.

Once Sarah is settled in a private room Stephen explains his side of things to Sarah and begs her forgiveness. It takes some time but Sarah and Rumi agree that after all that has happened they need their father and he eventually gets to give Sarah a gentle hug and a kiss on the forehead before he leaves. 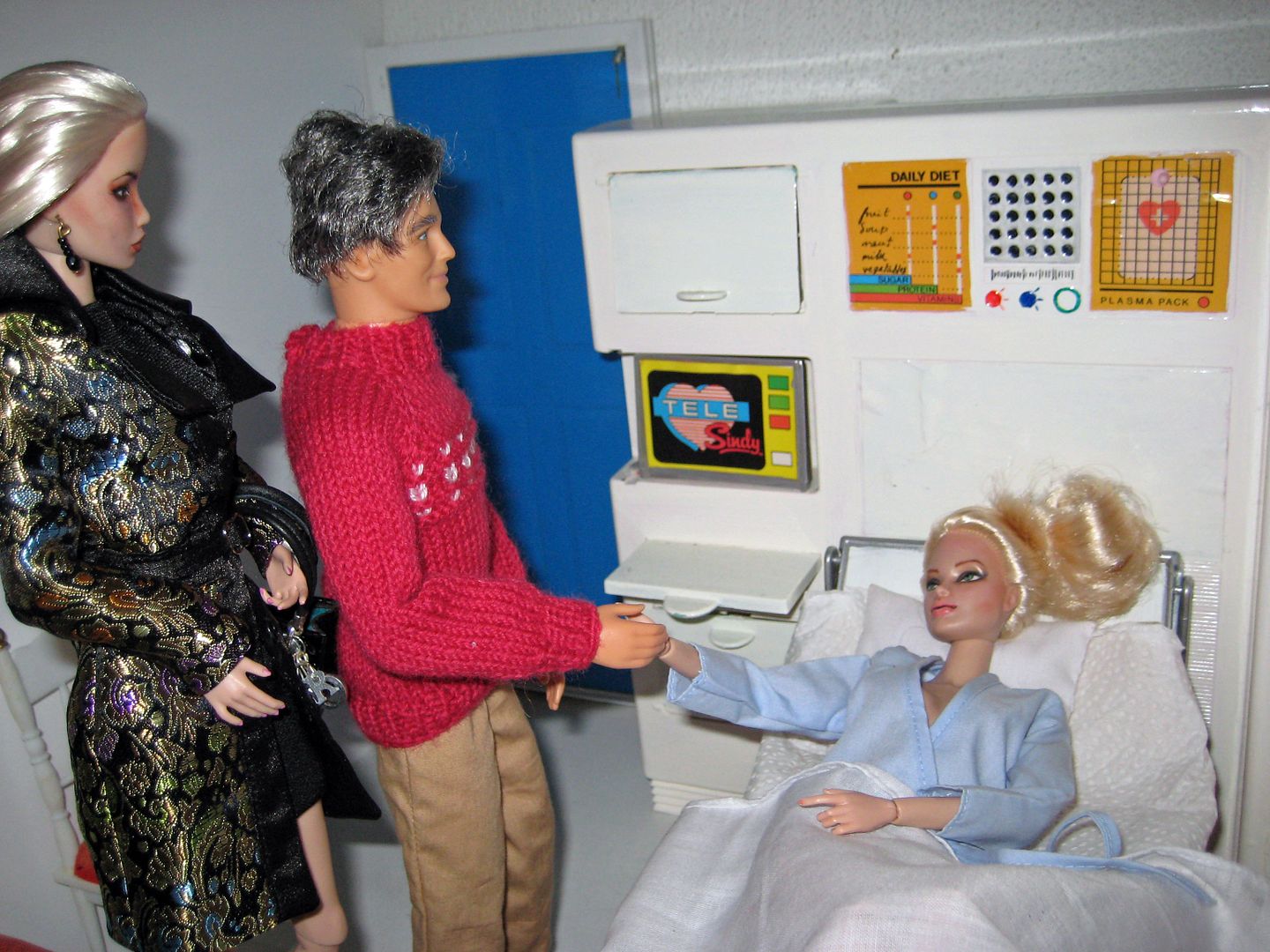 Jed is not around for the next couple of days but Stephen is at the hospital most of the time giving Rumi a break and some much needed rest.

Kandy even takes a break on Friday night spending some time with Chris... even if it was just a long hot bath a take-away and a massage before falling into an exhausted sleep in Chris's arms. (Oh, and it was Chris that ran the bath and gave the massage)

On Saturday Rumi and Kandy go to Agnes's home and collect Dawn and Ben tacking them to the hospital to see Sarah.

After a brief chat Agnes and Jonathan wave them off....

Sarah is overjoyed to see her children and is amazed at how much they have grown in her missing six months!

While Dawn is still overjoyed at seeing her mother Ben is more wary as Sarah has had little to do with him over the last few months.

But he soon finds he likes the smiley lady who coos at him and smothers him in kisses, after all at just over seven months old it does not take a lot! The visit is short and both children cry for Sarah when it's time to leave but Sarah is exhausted and needs her rest.

Stephen spends some time in the cafe with Rumi, Kandy and the children. He offers Rumi a lift and is overjoyed when she agrees so Kandy takes Dawn and Ben home.

When they arrive at Rumi's apartment building Rumi asks her dad if he would like to come in and meet his grandson? It's Stephen's first chance to met Marc, who is being looked after by a baby sitter.  This has been one hell of a week for Stephen almost loosing Sarah and then out of the blue he has his family back?!?!

The police want to interview Sarah but the family in consultation with the doctors hold them back for as long as they can in the end they have to agree though.

But Sarah can't help them as she has no memory of that evening and the doctors tell the police that they can't ask any questions about Sarah's life since the shooting as it will be to distressing for her.

The family agree not to tell Sarah about her sex addiction until she is stronger... but how to explain Neal's absence? Sarah is insistent that she wants to know what's going on and why has Neal not visited?

So after another discussion between Stephen his wife Maggie, Rumi, Kandy and Chris.... plus, a phone call to Agnes and Jonathan  it's agreed that she should be told some of what's happened to her and why Neal has not visited. So next decision... who tells her? They could go in ... on mass but that might be to much for Sarah?

A psychiatrist comes to see them and agrees Sarah's need some details and that her not knowing about Neal is not helping her!

Finally a decision is made and Stephan goes in alone to talk to Sarah while Rumi and Kandy wait just outside the door in case they are needed. Waiting with them is a doctor as no one quite knows how Sarah will react.

Sitting down Stephen takes Sarah's hand in his, Sarah sits up a little in her bed she looks at him with confusion written all over her face "Dad?... what's the matter ..... it's Neal isn't it...is he... is he dead? She..."

"No, baby!" Stephen interrupts her "Neal is fine!"

"Then why has he not been to see me?" Sarah starts to cry

"Because he's in prison sweetie..... that's why!" Stephen reaches up a gently wipes away a tear from Sarah's  pale cheek.

"Oh, I see!" Suddenly all the fight goes out of her and Stephen can almost see her retreat into herself in front of his eyes.

"Sarah...Sarah are you OK?" Stephen looks at her with concern.

At these words Rumi, Kandy and a doctor enter the room, Sarah looks over at them and with barely a movement waves them away.

Once they have left Sarah turns back to her father "Go on!"

With a small sigh Stephen continues " For attempted murder!"

Sarah's eyes light up and she laughs out loud "Don't be ridiculous Neal couldn't hurt a fly... no I mean really he goes all silly if I swat a fly!"

"The police say he tried to kill you by pushing you down the stairs!" Stephen shakes his head his voice tinged with sadness as he sees his daughter crumple before him.

"But Neal would NEVER hurt me..... he would never hurt me...never!" She sinks down into her pillow turning away from her father sobbing.

Stephen turns and looks towards the door, the doctor comes back in and looks at Sarah her body now heaving with silent sobs. A quick word with a nurse and Sarah is sedated.

"Mrs Hage will sleep for a good while now" the doctor tells them, then turning to the nurse "can we put Mrs Hage on half hourly obs!"

Once Sarah relaxes her hand from the vice like grip she'd been holding her fathers hand with he removes his hand and silently leaves the room.

Rumi and Kandy are waiting outside Sarah's room they hug him and the three of them make their way down stairs and out into the night. As they pass the news stand Kandy glances down at the headlines