Once Neal has been booked in he is taken to the interview room having also suffered the indignity of being strip searched. His clothes are bagged up and sent to forensics.

"May I talk with my client alone for a minute please?" Marco asks the policeman who looks to be in charge.

"OK, what the hell is going on Neal? The desk Sargent said you had been charge with trying to kill SARAH???" Marco asks Neal as the sit down.

Neal puts his head in his hand and sobs.... all the pent up anger and suppressed emotions of the last few months come out as he sits there. Eventually he manages to compose himself and taking a few deep breaths he tells Marco what happened adding that if Marco ever tells anyone about the mess Neal is in ....Marco will be next on the list he gives him a wry smile.

"So it was an accident... you did not push Sarah?" Marco asks just wanting to be clear.

"NO! I could never hurt Sarah!" Neal repeats.

Then the door opens and two policemen enter sitting down opposite Neal and Marco.

One of them turns on a recorder "Time is 11.32pm I'm DI (Detective Inspector) Wilmore and this is DS (Detective Sergeant)  Reed this is a formal interview with Mr Neal Hage, do I need to remind you of the charges Mr Hage?"

"No! Is Sarah OK? I would never hurt Sarah.... you must believe me!" Neal looks from one to the other pleading in his eyes.

The two police men exchange looks before one opens a folder in front of him. "Mrs Hage is holding her own at the moment! Now Sir, do you know a Ms Kyori Sato?"

Marco interrupts "I don't see what this has to do with anything?"

"Ms Sato is with an officer at the hospital as we speak! Apparently she needs three stitches in a cut above her eye... from being assorted by Mr Hage earlier tonight! Quite a night your having Mr Hage!" DI Wilmore tells him.

"I never hurt Kyori either? It was an accident!" Neal shifts in his seat.

"Like Mrs Hage fulling down the stairs.... that was another accident?" DI Wilmore asks.

"I'm sorry sir but Ms Sato says otherwise" DI Wilmore looks at his notes "she said you were in bed together you had a row and you shoved her so hard she hit her head.... is that not what happened?"

"My client won't be answering and more questions for now!" Marco tells the policemen.

"Probably a good idea as we have 'your client' bang to rights... plus a witness to the incident with Mrs Hage..... Mr Hage your going to go away for a long time!" DS Reed starts to collect up the papers on the desk.

"Interview over time now 11.41pm" both police men get up and leave the room.

"Neal? What happened with Kyori? This is not looking good.... you must tell me everything!"  Marco asks.

"Oh, god! I was with Kyori we had a row... I....I...I guess I ...sort of pushed her... I can't remember ...and she fell backwards... banging her head a bit? I never meant to hurt her... it really was an accident!" Neal knows things are looking bad, all he can hope now is Sarah comes round and tells them what happened?

"I'm going to see what other evidence the police have, just don't speak to anyone....Neal? Do you understand?" Marco tells Neal as he gathers his stuff together.

"Well, the police can hold you for up to  24 hours before review! I would think they will want to interview you again but for now your stuck in here!" Marco tells Neal

Neal sighs all the fight has left him and he just wants to be with Sarah but he knows that's not going to happen any time soon!

"Neal, do you want me to phone your mother...and what about the children?"Marco asks as he pre-pairs to leave.

"OK, I be back in the morning!" Marco gets up and taps on the door. It's opened immediately and Marco leaves the door is them closed behind him. Looking up Neal realises an officer has entered and is standing quietly in the corner watching him.

Soon after DI Wilmore returns "Were putting you in a cell until your brief gets back in the morning... this way Mr Hage."

Neal gets up without saying a word and is escorted to a cell.

He lays down on the bed and stares up at the ceiling, he had not realised how tiered he is and unbelievably he falls into a restless sleep.

Meanwhile the police are not resting as DI Wilmore goes to the hospital to check up on Sarah and to formally interview Kyori.

who just repeats her version of what happens and agrees that she wants Neal charged with assault.

Luke is interviewed about Neal by DS Reed.

Luke is dumbfounded when told what Neal has been accused of but has to tell them about Neal talking about having had enough and wanting to divorce Sarah!

Once DS Reed has finished interviewing Luke he drives to interview Agnes about life at home between Neal and Sarah.

Again she has to tell them how difficult things have been and as much as she tries to put a positive slant on things it does not look good for Neal.

Then it's back to the police station. At 9 o'clock that morning Topher arrives for his interview as to what he saw.

"How's it going?" he asks a PC waiting outside the door.

"The doctor came out just now and they are arranging to transfer Mrs Hage to The Wellington Hospital in London apparently she is stable but the bullet in her head has moved and she needs an operation!"

"How are the family holding up?" DI Wilmore inclines his head towards the family room

"As you would expect... the sisters are crying and the brother is hitting walls!" the PC replies.

DI Wilmore gives a rye smile "Sounds like Jed... we were at Hendon together! Is Iver with them?"

"Iver? No the only other guy in there is a guy called Chris... Chris Saunders!" the PC looks down at her note book.

Just then there's a commotion in ICU and the doors swing open Sarah is rushed along the corridor towards the lift.

"We are taking Mrs Hage to the heli-pad  they are transferring her to The Wellington" she calls out as they rush down the corridor.

"Get a couple of cars round and take the family to The Wellington!" DSI Wilmore tells the PC.

"The family need to be with their sister and the press are running wild outside... besides Jed is one of us!" DI Wilmore tells her.

"Now I'm going back to the nick and I'll interview the family later!" and with that he turns and head towards the exit.

"I would say we have a good case against him... pretty cut a dried really! It's a shame, I loved most of his films and my wife will probably not talk to me when she finds out! But I would say it's time to charge him and send the papers through to  the CPS!" (Crown Prosecution Service) DI Wilmore looks through the file in front of him.

"OK, Jeff I'll phone down and see if his brief is back!" DS Reed picks up the phone.

"If he's not then phone him and get him down here! I would like to get this wrapped up and spend a couple of hours with the family!" DI Wilmore stands and heads out of the room "Just going to the canteen and then I will be ready to interview Mr Hage again!"

Marco arrives back at the station having called in on Agnes who had tried to get Neal some clothes from the house but the place was sealed off and fall of forensics people. Then she remembered that she had a dry cleaning ticket for one of Neal's suits ...so it was a quick dash to the cleaners.

Marco had the clothes with him, he was hoping they would not be needed

but deep down he knew things were looking bad... even he was not sure Neal was not guilty?

Spotting DI Wilmore he asks how things are going "Well, lets just say things are not looking very good for your client!"

They all reconvene in interview room two. DI Wilmore outlines what information they now have and asks Neal a few questions,

but Neal has nothing more to say so he is formally charged and is given the suit to put on ready for court.

At St Albans Crown Court Neal is taken down to the holding cells and eventually he is brought up to the court room. 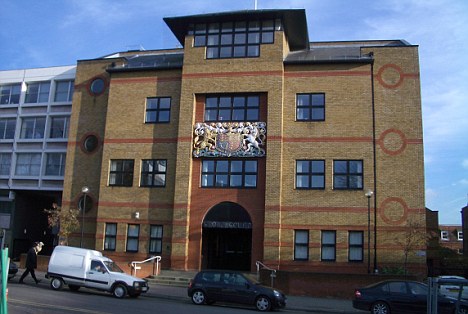 The charges are read out to him and after he has confirmed his name and address he is asked how he pleads.

"Not...not guilty to both charges!" Neal replies as he grips the desk in front of him for support!

Marco tries for bail but with Neal's connections even without his passport it is feared he could leave the country so bail is refused and he is told he will be remanded in prison until the charges are brought to court!

"Noooooooooooo!" Agnes cries out "You can't do this.... my boy has done nothing wrong!"

The judge bangs her gavel and calls for silence. "The court is adjourned"  he calls out and getting up he turns leaving through a rear door.

Neal is returned to the cells to await the van taking him to Pentonville prison.