This Episode may contain a story line and scenes that some viewers might find unsettling!

A few days after Neal had told Sarah about the children.... with outstanding lack of interest on her part, Neal tells her about Jed being back! This was met with a tad more interest especially when she met with Jed.... but overall her reaction was one of very little interest!

Neal moved back to their home a few days before Sarah was due to be released from hospital and with the help of both families soon had the house ready for Sarah's return. Once she arrived home Rumi and Kandy visited daily as did Jed..... to start with but he found Sarah's behaviour hard to deal with (especially when she hit on him!!!!!) She still has some memory issues and has trouble remembering he is her brother!!!!! UGGG!

Chris and Iver are staying away at the insistence of Rumi and Kandy! Iver is not around anyway as he has gone to visit his family (Rumi told him to clear off for a few days)

Agnes and Akaine had stayed with them to start with but Sarah's inappropriate behaviour had made Agnes feel very uncomfortable. Akaine of course found it all very amusing! So Agnes and Akaine are now living in the cottage and visiting daily.

Sarah has been home from the hospital a couple of weeks now. Her 'demands' are starting to wear a little and Neal can now see what the doctor meant about Sarah wanting constant sex. Plus, her personality appearers to have done a U tern...........

Sarah meanwhile is feeling ready to start going out and about. She takes a look through her wardrobe and is amazed by the safe and boring clothes hanging on the rails and folded neatly on the shelves.

"Well you could have a day out with Kandy go shopping and buy some new ones if you want!" Neal shrugs.

"Kandy! She's just as boring as these clothes!" Sarah starts to empty the wardrobe onto the floor

"Sarah? That's not a nice thing to say about your sister!" Neal is perplexed by Sarah's attitude.

Sarah just smiles and removing her gown reviling her nakedness she walks over to him pressing her body against him.

"I'll show you nice!"as she nibbles his ear then she kisses him with an almost frenzied passion... soon they are making love.

Then they hear Dawn crying, Neal stops mid flow but Sarah is more than a little cross "Leave her, Molly will see to her!" and she tries to regain his interest.

But the moment is gone for Neal and he moves away from Sarah, he pulls on his boxers and leaves the room to check on Dawn

By now Sarah is furious, she sits up and swinging her legs round is off the bed in one movement. Staring at the pile of clothes on the floor she grabs a little black dress and black heels she dress quickly and with a quick comb of the hair she picks up her car keys and purse leaving the house without a backwards glance.

Sarah drives into town and heads for a nearby bar. She has no problem picking up a guy and after a couple of drinks they head around to the back of the pub for a quickie!The guy has had a few drinks and it does not last very long, Sarah moves on to another bar and another man, not returning home until early the following morning.

Neal is sitting in the kitchen drinking coffee, he jumps up on hearing Sarah's key in the door and rushes to the hall "where the hell have you been all night? I was worried sick! I've been phoning you all night... did you turn your phone off?"

"I went out for a drink and a little... satisfaction, if you know what I mean!" Sarah winks at him removes her shoes and heads upstairs wiggling her butt as she goes. "As to the phone it was annoying me so I turned it off!"

Neal just stands in the hall looking up at the woman he loves more than life itself... the woman who has just destroyed their marriage in one sentence! Oh, he could cope with her cheating on him....just, but what she said the way she said it? He knew it would never be the same again? Oh, he would not leave her, he could never leave her but if this was a sign of how life was going to be????? He needed to protect Dawn and Ben, but how?

Neal follows Sarah upstairs and can hear the shower running, entering their bedroom he notes Sarah's dress in a heap on the bed picking it up and he throws it in the wash bin.

Then he lays down on the bed and is soon asleep.... a restless sleep filled with strangers having sex with his wife while his children looked on! Neal awakes with a start feeling his wife running her finger down his chest.

Neal jumps up like a scalded cat "No! Sarah, NO! I can't... I just can't do this any more! I'll sleep in another room for now, we can talk later!"

As Neal, get up to leave Sarah studies him "If you go, if you don't give me what I need.... you know I'll go elsewhere  don't you?"

"Yes! I know!" and with a deep sigh Neal leaves the room going into the room next door (the nursery)  he looks at his sleeping children.

Then turning quietly he heads down the hall to another bedroom and closing the door lays down on the bed, but as tiered as he is sleep evades him and the last couple of months spin round and round in his head!

Neal must have dozed off at some point as when he wakes and looks at the clock he sees it's 10.15am. He can hear his mother downstairs chastising Akaine for some misdemeanour or other? Molly is playing with Dawn and and he can hear Dawn's sweet little giggles. Neal smiles at the happy family goings on and then like a slap in the face he remembers Sarah returning home earlier this morning.

Groaning Neal gets out of bed his head is splitting.

After a visit to the bathroom Neal opens the master bedroom door he sees Sarah is still asleep she looks so beautiful.... so serene she stirs a little and Neal puts out his hand about to move a stray hair on her face then thinking this might wake her he drops his hand

and turns going to his wardrobe and removing as many clothes as he can, he carries them along the hall to what he thinks will now be his bedroom. Dumping the clothes on the bed for now, Neal puts on his dressing gown and heads downstairs in need of comfort from his children and reassurance from his mother.

Leaving Molly playing with the children and Akaine sulking in front of the TV Neal and Agnes go out and sit in the garden. Neal tells his mother 'most' of what's been going on, she is saddened but not surprised "Neal, I'm so sorry all this is happening to you, I wish I could change things for you!" Agnes sighs "I know you love Sarah but should you stay with her?"

Neal opens his mouth to protest but Agnes holds up her hand "Please let me finish... I've been looking on the Internet about this....Amygdala thing and brain damage, it's all pretty disheartening and what about Dawn and Ben? It's fine now while they are so little but when they get older?"

"I know mum...I've been thinking about the children and how this will affect them? At the moment I have been able to keep all this 'thing' with Sarah out of the papers but it's only a matter of time....if...if... Sarah is going to start roaming her indiscretions are bound to come out? I'm lost... I just don't know what to do...BUT, I do know I can never leave Sarah!"

"Well, then I guess you had just better get a good lawyer and  do what you have to do to try and keep Sarah away from other men!" Agnes pats Neal's hand and starts to get up excusing herself as she wants to check Akaine has not got the TV on to loud???

"Yes, dear ....that's what I'm saying!" Agnes's voice catches in her throat and she curses to herself knowing Neal will have heard the catch in her voice and she soooo did not want Neal to know how upset she was! Quickly she leaves him and heads back into the house.

"Oh!"  Neal is left alone with his thoughts.

Just then Sarah appears "I need coffee!" then turning she spots the motionless Neal sitting at the table, she smiles and wraps her arms around his neck "and I need YOU! lover boyyyy!!!! Lets take our coffee's to bed?"

Neal chokes on his coffee and tries to disentangle himself "Sarah! your naked! Can't you put some clothes on? We are not the only people here you know!" he looks up in the sky checking there are no helicopters around?

Sarah shrugs and sits on Neal's lap "It's OUR home and we can do as we want!" She starts to wriggle on his lap and Neal is now feeling desperate...

"OK, Sarah.... lets go to bed!" Neal gets up taking hold of Sarah's hand and hoping he can get her back indoors and upstairs without his mother or Akaine coming out of the living room. The living room door is ajar and Neal can see his mother and Akaine playing with Dawn. Placing his body between Sarah and the doorway he whisks Sarah past and up the stairs, 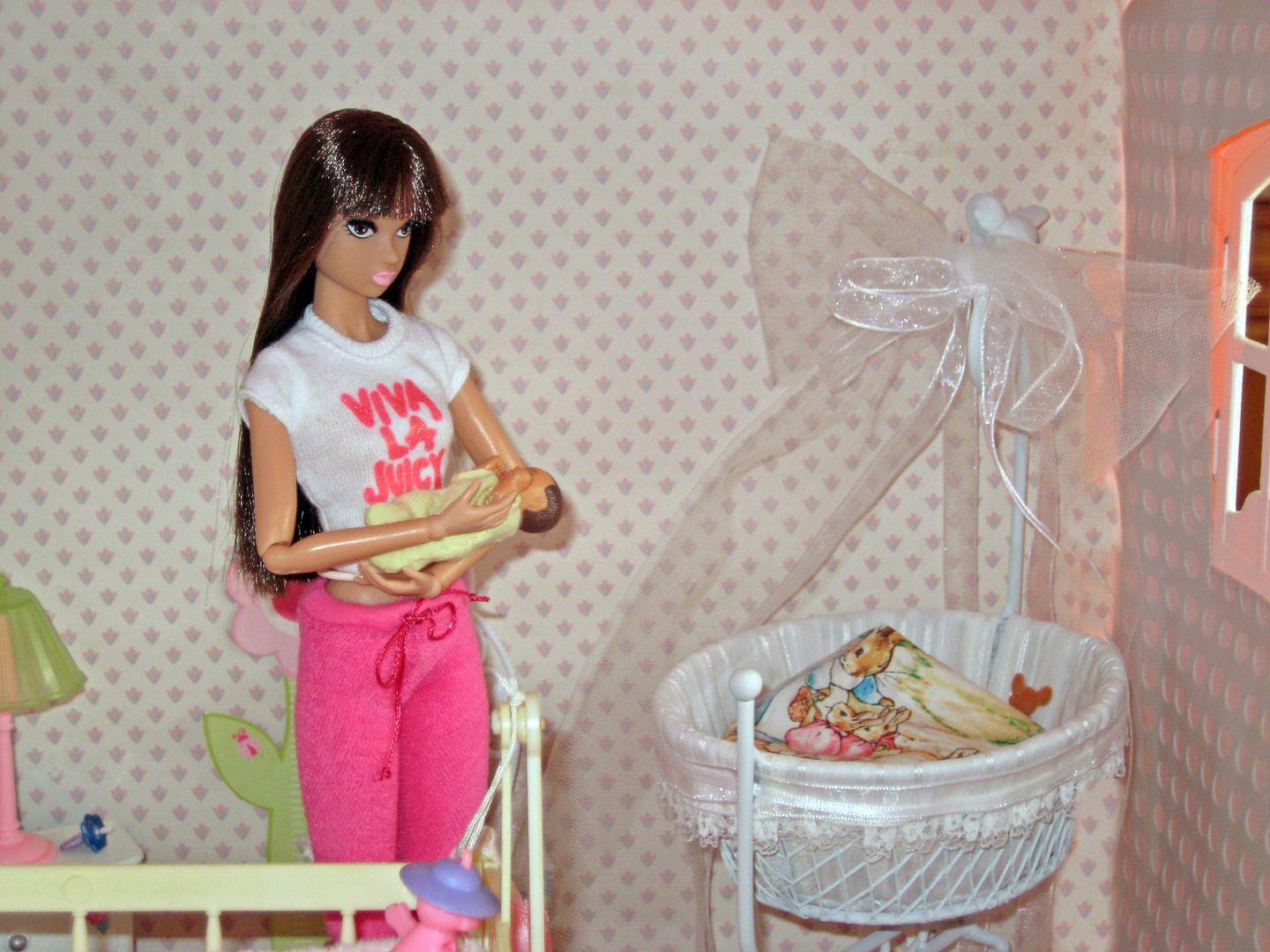 So he hustles Sarah into their bedroom and performs what he is starting to feel is his duty!

Neal is not sure how much more he can take but is determined to see this through.... maybe he should ask the doctor for some sort of drug or something to give to Sarah so he could maybe get just one nights sleep? he wonders......