"It was on the news about Neal and his wife... we had to come and see if everyone was OK?" Richard replies

"Well, we don't need you! Or you child companion!" Angela is spitting mad. Luke takes his dad to one side trying to ignore the dagger look from his mother.

"Look dad, things are bad, real bad.... I think your just going to make it all a lot worse and what's Izzy doing here?"

"OK, son we'll go, we are staying at the Waldorf suite 1107 phone me, perhaps we could have dinner?" Richards voice is tinged with sadness.

Luke looks at his father confusion written all over his face and a million thoughts buzzing around in his head. Why is Izzy here? and why would she be staying in the same suite as his father? Unless.....no.....that's just SICK!

"Dad? you....and Izzy....your not?....please say your not?????" Luke feels physically sick he looks over at Eden who is holding his mothers hand and they are both staring back at him.

"Isabelle  and I married three months ago!" Richard announces. He had wanted to tell Luke quietly but things just never work out when it comes to his family? As a highly regarded criminal lawyer  he could always pre empt the other sides next move but in his private life.... he was often at a lose?

Isabelle looks up at Luke and taking his hand "Please be happy for us Luke, I love your father very much... and he loves me!"

Luke snatches his hand away looking from Isabelle to his father and then over to his mother and Eden " I'm sorry dad, Izzy but this is a lot to get my head around....and I need to be here for Neal! I can't do this now... please leave!"

Angela starts to recover from the shock announcement but Luke flashes her a look and shakes his head holding up his hand "It's OK mum, dad's going" and he opens the door. Turning to his father "Dad please....not now! I'll phone you later..... do dinner?"

Richard's shoulders drop and he concedes defeat with a sigh "OK, son... you call us later" he turns to Izzy and putting his arm around her turns to leave "Come on Isabelle lets go!"

But Isabelle is having none of it  "NO! this is not right... your still Neal's uncle if he wants you to leave OK, but until then you should stay with your family... I'll see you back at the hotel" then leaning on him she whispers in his ear "It's time you stood up to Angela, she can't tell you what to do any more!"

Angela who has hearing like a bat catches most of what Isabelle whispers to Richard "What DO you mean child? My relationship with Richard is none of your dame business!!!!"

Angela's lip curls at the corner "and six months ago you was dating my son... If Richard's father was still alive I expect you would be in his bed next!"

Richard and Luke both stare at Angela

"MUM!!!" Luke is shocked this was nasty even for his mother

"Angela....." Richard sighs and taking Isabelle's hand pulls her from the room before anything else can be said.

Luke looks at Eden but she is staring intently at a spot on the floor then he turns to his mother she looks back at him defiantly she knows she went to far but will not back down "Well, he makes me soooo mad! and to marry that little TRAMP!!!"

Luke is seething, all his life it's been like this .... his mother bitter and sharp tongued, his father quite and dignified trying to reason with his mother and in the end giving up and walking out! Luke had hoped that after the divorce things would change a little... humph! fat chance!

The door opens again and for a second Luke thinks his father (or Izzy) have returned for a second round with his mother but it's Neal being pushed by Jed.

"How is she?" Luke, Eden and Angela ask in unison

"Was that uncle Richard I just saw getting into a lift?" Neal looks straight at Luke

"Still unconscious they think they might need to operate again this afternoon and release some of the pressure on her brain? Neal shakes his head grief written all over his face.

"Are Kandy and Rumi still with her?" Eden asks standing up and taking a hold of Luke's hand.

"No, Rumi needs to check on Marc, so Iver's taken her and Kandy home to get a change of clothes and stuff...."

Luke puts his hand on Neal's shoulder and gives it a gentle squeeze "why don't you get some rest man...." then looking at an equally exhausted Jed "both of you look ready to drop!"

"NO! not until Sarah wakes up!" Neal replies in a determined voice.

" But that could be days? At least go and get something to eat and a drink... we'll wait here, any news I'll come and get you! Eden you could go too!" Luke turns to Eden mouthing 'please' and reclining his head slightly towards his mother who is now pacing the room.

Eden come forward "OK, you guys... take me to the cafeteria!" 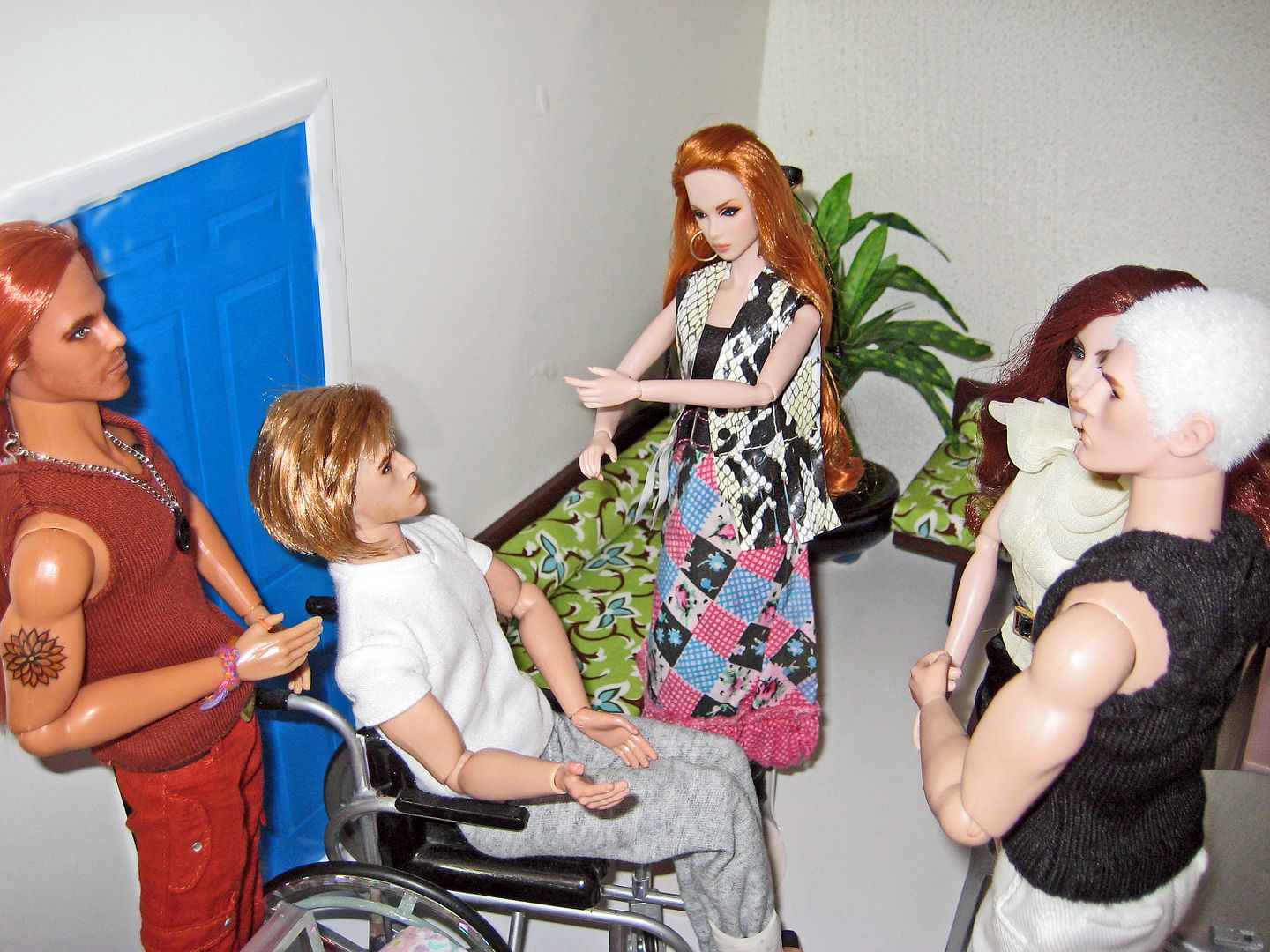 Jed and Neal concede that Luke is right and follow Eden out of the room and head for the cafeteria.

Luke turns to his mother and is surprised to see she is crying "mother?"

Angela dabs at her eyes with a hankie (careful not to spoil her make-up)  "I'm fine... it's a bit of a shock, finding out the man you love has dumped you for a 'child'!"

"Mother? Your always going on about how much you hate, loath, despise my father.... now after 22 years you love him? " Luke is bemused

"I've always loved your father!" Angela looks up at Luke jutting out her chin.

"Well, you have a mighty funny way of showing it!" Luke turns away worried he might start to laugh at the look on his mothers face.

Angela sees the upward tweak in the corner of her sons mouth and knows he is laughing at her "this is soooo not funny Luke! Your father has just announced he has married your girlfriend!"

Luke turns back to his mother "EX girlfriend! It could be worse you know!"

"Worse? Worse?... how could it possibly be any worse?" Angela looks at her son with a look of confusion on her face.

Luke smiles at his mother and gives her a hug "Izzy, is sweet, she's loaded so is not after dad for his money and dad's had a vasectomy so at least he can't get her pregnant!"

Angela shudders at that last thought, she hugs him back smiling a little "Promise me you won't ever rush into getting married? Stay single for a long, long time..... marriage is the pits!"