After returning to Neal's home the guys have some lunch (not that Neal can eat much) and Iver spends a lot of time on his mobile phone.

Late afternoon they get the call they have been hoping for, a local police officer remembered bringing in a couple of girls a few months ago one of them was called Sky Meadows both girls were long time drug addicts! He thought he might know the squat she was living in and he passed on the details to Iver.

Just as they were about to leave Jed arrived so the three of them set off to the address Iver had been given.

Again the area was a dump but nowhere near as bad as the one they had been to that morning.

Two police officers meet them just down the road fearing that Sky might try and run.

The officers knock on the door, Neal had tried to argue that it would be best if he went to see her on his own but some of the other addicts Sky's sharing a house with have records for violence the police inform him.

As you could have predicted Sky tries to run taking the baby with her. The police catch her near a river where she threatens to throw the baby in!  Neal has had enough and calls out to Sky

Neal edges a little closer "Yes! All true... now Mel said you would give me the baby! Please Sky, will you had him to me?"

"Yeah, sure! Where is Mel any hows?" Sky moves away from the edge of the bridge and hands Ben to Neal.

As soon as she does this the police pounce and she is arrested (Not sure what for.... I guess they will think of something later?)....

All the time this has been going on the baby had been crying. Looking down at the baby... his son Neal can see the child is very small and pale. Turning he see's Iver who guides him to a waiting ambulance (not sure where that came from either? I guess the police called it?)

Neal hands the baby over and after checking him out the paramedic tells them the baby needs to go to the hospital immediately.

At the hospital they see Dr Luc Peters who checks the baby over then issues instructions to a nurse before asking Neal to accompany him to a small office. Neal fears for the worst and thinks maybe the baby will die? This would solve a lot of his troubles but he has already started to bond with the child and feels like a lead weight is in the pit of his stomach.

Dr Peters gets straight to the point " The baby,...your son?" Neal nods "Your son, is very poorly but he's a little fighter I see no reason why with the right care he won't be able to get through this. His mother.... a drug addict?"

Neal shrugs his shoulders "I guess so? I only met her this morning"

"Ammmm, well OOOOKKKK? You donated sperm then?" Luc looks a little confused, why would Neal donate sperm? What would a drug addict be doing with it?

"Look Luc, I have no idea HOW this girl ended up with my baby? But she did!" Neal shrugs his shoulders "and I'm going to bring him up as mine! So tell me what's wrong with him .... is it the drugs?" Neal looks a little desperate.

"OK, first are you sure the baby IS yours?" Luc asks.

Just then a nurse appears with a bottle and offers to feed Ben "No, thank you but I'll feed him!...If that's OK?" Neal looks over at Luc who nods his head.

When the nurse has gone Neal goes back to what he and Luc were talking about....

"Sure, I'll get that sorted for you! Now as to the babies immediate care I want to keep him in for a couple of days and see how things go. At the moment he is dependant on Heroine and he will need to be weaned off..... This is a long hall thing... there will be no quick fix....excuse the pun ...and what does Sarah think about all this?" Luc tries to reassure Neal.

Neal winds Ben and then holds him close gently 'chuching' him until he falls asleep.

Once the baby is settled Neal meets Iver outside the private room the baby is to stay in. He spots the police guard and then remembers that the baby might well be in danger from other sources too!

"I need to talk to Sarah" Neal tells Iver. 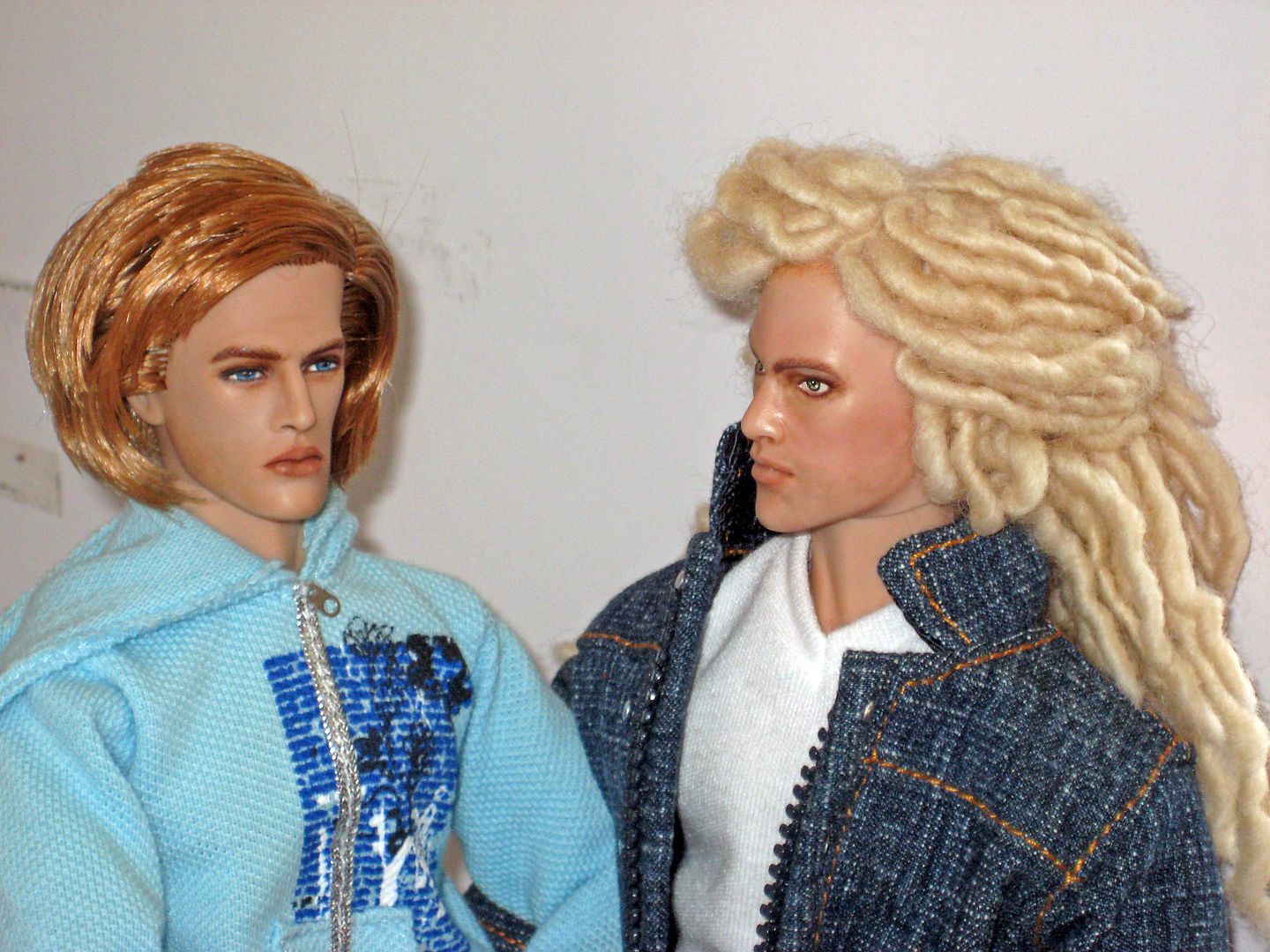 Meanwhile Ben sleeps on unaware of the drama's surrounding his birth....

Iver takes Neal back to the apartment that he shears with Rumi.

The apartment where Sarah is staying with her sister Rumi.

As soon as Rumi hears the door open she comes running  into the hall throwing herself into Iver's arms kissing him with passion.

Neal holds up his hand and smiles "No problem... nice to see someone's getting some!"

Rumi grabs Iver by the collar and dragging Iver towards their bedroom tells Neal Sarah is in the living room. "So tell me? I want to know what's been going on" she says to Iver as he kicks the bedroom door shut(Yeah riiiight!!!)

Neal enters the living room to talk with Sarah not sure where to start he decides to just dive straight in.

"We need to talk!" Neal starts

"Why does that sentence always make me feel sick?" Sarah looks at him. 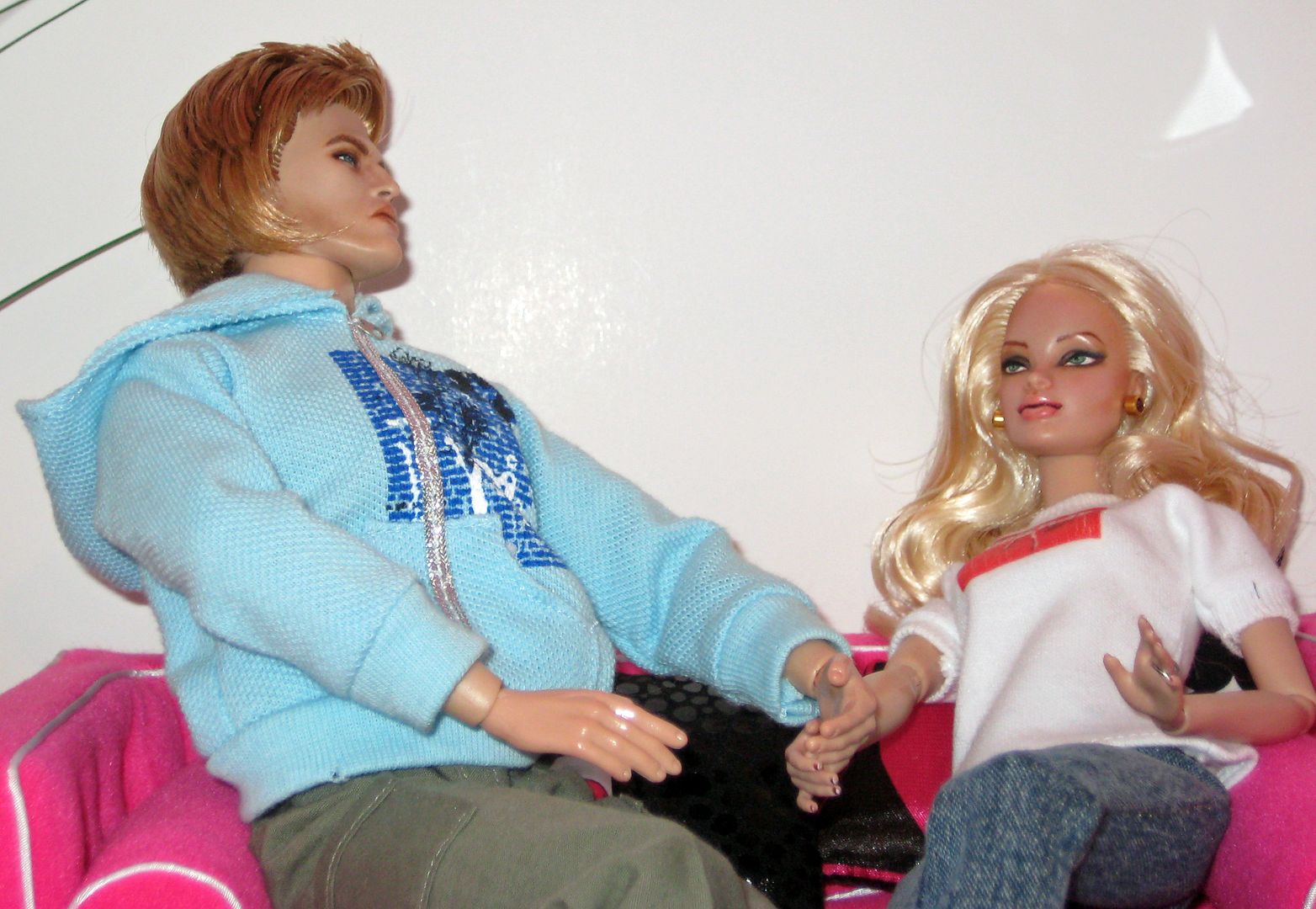 "The baby... Ben, I want him to live with us! His mother is a drug addict and in no fit state to look after him!" Neal looks at Sarah for a spark of understanding.

Sarah just looks at him incredulous..

"It's not the boys fault his mother a druggie nutter! Or that I agreed to do Neal's Dates or any of this????" Neal goes on.

Sarah finally finds her tongue  "It's not my fault either!"

Neal shuffles his feet looking down at the floor.

" I know but his mother... well she has problems" Neal looks at Sarah pleading in his eyes.

"Yes! She slept with YOU! and why the hell did you not cover it up? That's what DUREX was invented for!" Sarah is loosing her cool.

"I don't use DUREX I use VIRGIN there a bit bigger... better fit! Anyway I did! I always do... you know that!" Neal is on the defensive.

"Well, I use Lilets tampons but last time YOU brought me Tesco own brand...I still used them! ....What does a name matter? As to you always use them where do you think Dawn came from? She, I think you will find proves that you don't ALWAYS cover it!" Sarah spits back at him.

"Nope! you are quite right I have never used a Tampon but I did use a condom until we married! Then we stopped using them...you said it was OK? If I remember rightly?...... YOU was there at the time!!!!" Neal can feel things are slipping away from him.

"So many women so many babies...I'm surprised that YOU can remember!" and with that Sarah gets up a leaves the room.

Neal is left standing in the centre of the room, 'well that went well then?' he thinks to himself.