The Priors... Episode Fifty One... Neal Chats With Erin And Gavin

OK, so where do I go from here? Neal's in a quandary. Should he tell Sarah what he had found out? It's so much more serious than he thought? Maybe Kyori would be able to help but then again he did say he would not keep any of this from Sarah? Neal lets out a big sigh as the driver turns the car into his drive. He can see that Kandy's car is still here....good at least this will give him some time to work out what to do and say!

Entering his home he calls out to Sarah "Honey I'm home!" But even before the last word is emitted Sarah is at the living room door.

Dang! he was hoping for a little more time "Your sisters are still here... maybe we should talk about this later?" 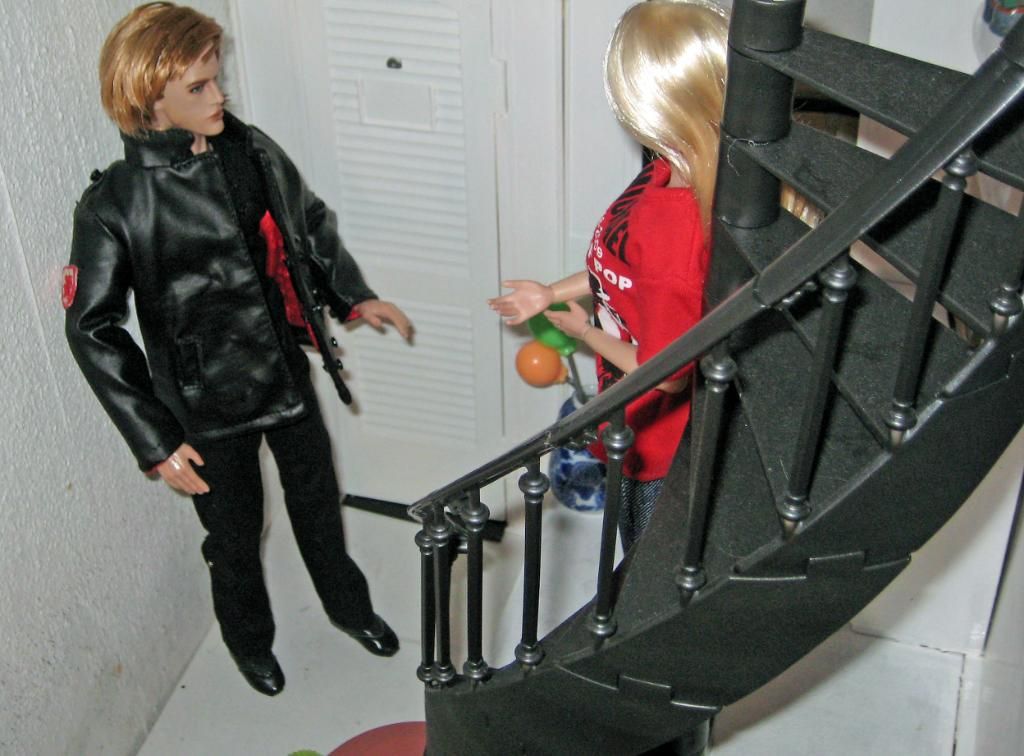 "We can go in the dining room... I need to know what's happened? Is Jett the mother? You look a little worse for were? Or are you still hung over from last night?" Sarah talks as she heads for the dining room expecting Neal to follow. But he stays near the front door as if rooted to the spot.

Sarah turns and looks at Neal her head tilts slightly to one side "Neal? What happened? You need to tell me!"

Neal thinks quickly and follows her into the dining room shutting the door."OK, no Jett's not the mother but she was in a bad way Dania Zarr has got her in to drugs!"

Sarah shakes her head she has never met the woman but she sure sounds like a nasty piece of work!

Neal continues " There's more.... I think Dania has something to do with the baby? But I'm not sure how?"

"But I don't get it..... Did you sleep with Dania? I thought it was Luke that was sleeping with her?" Then just thinking about it she asks "Or is the baby Luke's?"

Neal ponders for a moment "I don't think so...... I think if someone as famous as Dania was pregnant it would be difficult to hide? I reckon it would be all over the papers!"

Sarah sighs "OK, so it was worth the thought! So.... your meeting with Jett we still don't know any more about who this baby is or who the mother is?"

"No! But there are a couple of other things I need to tell you" Neal looks at Sarah not sure how to proceed.

Sarah bristles but before she can say anything else Neal holds up his hand "Let me finish! As I said Jett was in a bad way so I've arranged for her to go into rehab.... hopefully she will be safe there!"

"Safe? What do you mean?" Sarah starts to feel uneasy.

"Ammmm, look I think Dania is nuts! Dangerous and nuts! I also think she wants to get back at me for Giselle, Luke and some other stuff!" Neal tells Sarah gesturing with his hands hoping he is doing the right thing in telling her and not frighting her UN-necessarily!

Sarah starts to understand what Neal is trying to tell her and a look of fear comes over her face. Neal goes to her a holds her in his arms kissing the top of her head. Just then the door bursts open and they both jump.

"Sarah... Oh, Hi Neal! We were wondering where you had gone.... don't you have a bedroom for this stuff?" Rumi laughs.

Neal and Sarah smile back and Sarah asks if they want a drink or anything?

"No thanks, I was just looking for you to tell you Kandy and I are going now, Marc's getting grouchy I think playing with Dawn has worn him out!"

Just then Kandy appears holding a squirming Marc who holds his arms out to Rumi as soon as he see her, taking Marc from Kandy "Like I said a grouchy guts!"

"Oh, Molly has Dawn by the way!" Kandy tells them "Anyway I guess we had better get this little monster home!" and she ruffles Marc's hair.

Just then the phone rings and Neal bids Rumi, Kandy and Marc goodbye as he goes off to answer it.

After Sarah has seen her sister's off she goes in search of Neal who has just put the phone down and is holding a piece of paper with what looks like phone numbers on it.

Neal looks up as Sarah enters " That was Kyori! I filled her in on what happened with Jett and she gave me Erin and Gavin's phone numbers!"

"OK, you had better phone them then!" Sarah tells him.

"No! phone them now... lets get this over with!" Sarah tells him picking up the phone and handing it to him.

Neal takes the phone silently and starts to dial, Sarah is unsure whether she should stay or leave but once Neal's has dialled the first number and is holding the phone to his ear he takes a hold of Sarah's hand.

After a few rings the phone is answered "Hello, Erin here!"

"Neal?" Erin tries to think who Neal is.

Sarah looks at him and mouths at him "your rambling... get on with it!"

"OK! Have you had a baby? Is it mine? Are you blackmailing me?" his words tumble out.

Sarah gives him that 'you have just grown a second head look.

"NO! NO! NO! I most defiantly do not have a kid... I'm waaaay not ready for all that! .... But who's blackmailing you?" Eden sounds shocked.

"Look sorry to have bothered you just please, keep all this to yourself...please, Erin" Neal pleads.

"Look, it sounds like you have enough going on, I wont say anything... I promise!" Erin tells him.

"Thanks Erin, Bye!" and Neal presses the off button on the phone.

"Well, that went well! Boy are you an idiot!" Sarah looks at him shacking her head. 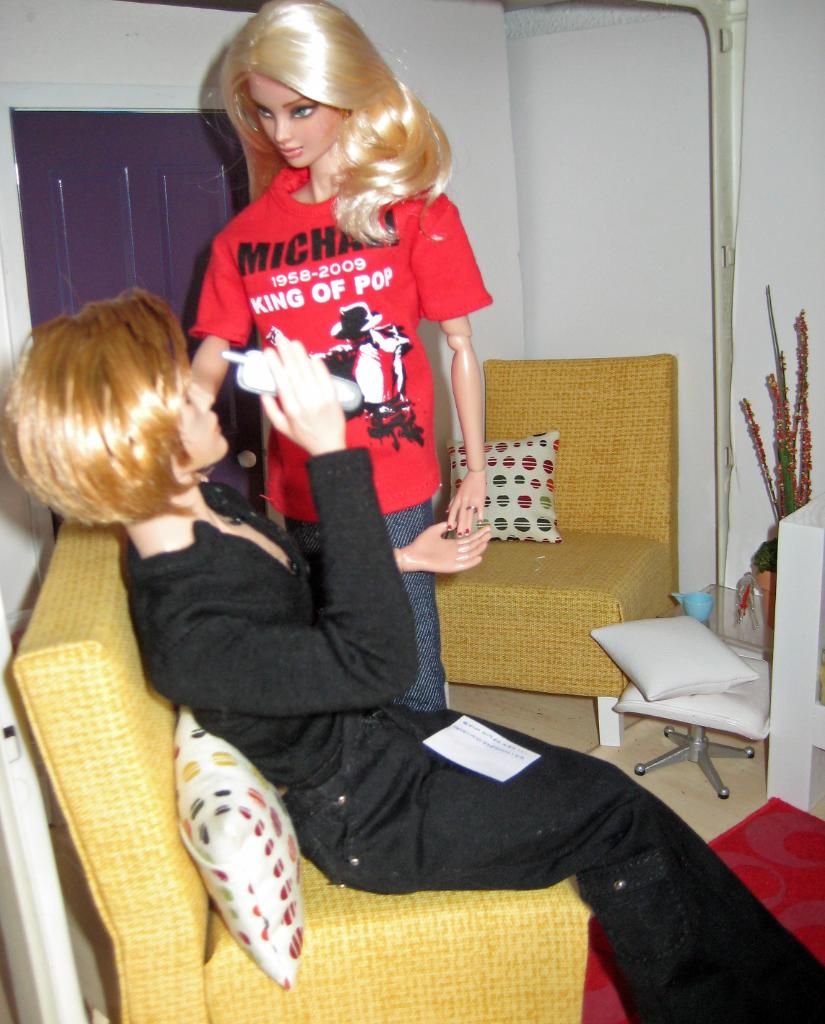 "Oh! and this is a breeze for me?" Sarah frowns

"OK, I'll try to do better this time" Neal tells her as he starts to dial.

Sarah sighs and shaking her head takes the phone from him " This is Neal Hage's service, can you phone him please on 01922 435665... it's important!" and she switches the phone off.

"WOW! Your good at this!" Neal looks at Sarah in ore!

"Twit!" Sarah says as she leaves the room. Neal follows her and they both go up stairs to see Dawn. Just as they reach Dawn's room the phone starts to ring.

"I'll get it!" and Neal heads of to their bedroom.

Sarah is about to follow when Molly appears with Dawn "I'm going to get Dawn her dinner, do you want me to feed her?"

" Oh, yes please... I'll be down soon! Oh, and Molly could you put the kettle on please I'll make us a cup of tea when I come down in a minute!" Sarah tells Molly as she heads for her bedroom to see what sort of a mess Neal is making of this one..... that's if it's Gavin of course?

On entering their bedroom she sees Neal sitting on the bed laughing into the phone "who is it?" Sarah asks "Gavin!" Neal mouths back.

Neal nods his head and says "goodbye" into the mouth peace and puts the phone back onto the base unit.

"Well that went better, by the looks of things?" Sarah asks.

"Yeah!" Neal looks a little sheepish "Anyway, she said pretty much the same as Jett! Dania tried to get her to do this 'thing' but she refused, Dania also tried to get her into drugs but Gavin's mother found out and Dania had to back off!"

"So Gavin's not involved either? OK, so it's not Kyori, Reese, Gavin, Jett, Eden or Colette so it's either Aria or Ayumi?" Sarah looks at Neal questionly....  deep... very deep down there's a little voice saying 'maybe there are others he's not told you about?"

"Well, I think Aria was at the New Year party so I'm thinking it can't be her or she would have said something?" Neal can see the wary look in Sarah's eyes.

"So we need to find Ayumi then?" Sarah looks him straight in the eye.

Just then Molly calls up stairs "I'm going to feed Dawn now and I've made your tea!"

"Thanks, Molly were coming!" Sarah calls out and turning leaves the room followed by Neal.