Rumi and  Iver have been getting along well. Apart from a couple of occasions when he would phone and tell her he was going away and would be back soon! The first couple of times Rumi was on tender hooks worried that he would not come back. But he did, and slowly she started to trust him. She guessed that he just had to have time out sometimes? Some guys were like that!

He did hate where she lived though! On that he agreed with her father the place was little better than a cesspit!

When he arrived back this time he went strait to Rumi's flat. Kids scrawling graffiti  on the wall, a drug deal going down on the corner, shouting and bellowing from one of the flats... this was all to much!

Sighing he makes his way to the flat and lets himself in using the key Rumi had given him.

Rumi was trying to wash out some of Marc's clothes by hand while Marc played on the floor with his toys.

As he walks in Rumi turns drops the washing back into the sink and runs to him putting her arms round his neck and kissing him as if she would never let him go. Running her wet soapy hands through his hair!

They eventually had to let go of each other as little hands were pulling at Iver's jeans.

Iver scoops him up into his arms "look at you little man.... talking AND standing on you own two feet? When did THIS happen?"he turns to Rumi.

"Well, the 'Dada' is as much a surprise to me as it is to you he's been standing up for a week now!" Rumi tells him.

Then they all tumble down onto the sofa laughing and hugging!

"Rumi, I want you to move out of here! This place is awful I need to go away so much and I can't be worrying about you in this dump!" Iver looks at Rumi a slight frown on his face.

Rumi bristles and sits up poker straight "That's all well and good Mr High and Mighty but for your information I don't have the money to live anywhere else. It's not for ever Neal has brought some apartments in The Priors. When it's built  Marc  and I will be renting one of them! .... Don't look at me like that!"

"Rent one?" Iver gives her an old fashioned look.

"Yes! I don't except hand outs! What ever people think of me!  Don't think Sarah and Neal haven't tried to get me out of here before now? Neal has offered more than once to rent a place for me, but I don't want to feel obligated to ANYONE!" Rumi flashes a defiant look in her eyes.

Rumi stand and turns her back to him.

"Live with you? The three of us? All the time? Seriously?" Rumi tries to work out if Iver is serious.

"Oh! OK, then!" Rumi smiles up at him putting her arms round his neck and kissing him with passion!

but takes a deep breath and pulls away from her. Rumi arches her eyebrow and looks at him quizzically "What?"

"We have an appointment to see a place in  (looks at clock) just over half an hour!" He slaps Rumi on the bottom and tells her she had better get ready quick smart as it's a twenty minute drive across town!"

On arrival at a smart looking apartment block just round the corner from Kandy and Chris's place and not far from Sarah and Neal's.  Iver drives into the private car park, jumps out and goes round to help Rumi out then he un-clips Marc from his car seat and they walk up to the main entrance. Iver pushes one of the buttons and a buzz can be heard followed by a crackle and a disembodied voice "Hello?"

Iver speaks into the intercom " Hi, it's Iver!"

There's another buzz and the voice tells them to come on up the door lock clicks.

Rumi looks around trying to take it all in. "This place is soooo beautiful, How can we afford a place like this?"

"Don't worry my sweet it's a very good price!" Iver says kissing the top of Rumi's head as the lift doors open.

Stepping out into the spacious hallway they are greeted by a guy standing at an open door " Hi, Iver glad you could make it! Then turning to Rumi "and this must be the beautiful Rumi ... and you son... Marc? wasn't it?"

Rumi smiles and shakes the hand offered to her "Yes, on both counts!" Iver intones " Rumi meet Phil...a work colleague this is his place"

"Oh, I see and why are you moving , Phil?" Rumi asks stepping into the bright and airy hall.

"I'm moving abroad, tomorrow in fact so you see why we need to sort things out fast!"

Phil leaves them to look on their own as he has some calls to make. As they look around the apartment Rumi is hardly able to contain her excitement!

Kitchen dinner with all new units, separate living room, TWO bedrooms and a bathroom with a BATH!!!! What heaven!

"So what do you think?" Iver asks.

Rumi opens her mouth to answer but just a squeal comes out so she nods instead as Iver picks her up and twirls her around. Marc who is exploring stops and looks up at his parents happy faces he bobs up and down on his bottom claps and sequels too!

Just then Phil comes back into the room "That would be a 'yes' then?"

"YES!!!" Iver and Rumi say together "Oh, yes! when can we move in?" Rumi adds laughing.

"Well, now if you like!" Phil tells them "My flight is at six in the morning. I will be leaving in about  ten minutes, got some people to see so you can have the keys now!" and with that he hands Iver the keys.

"But? Don't we have to sign something? A lease or something?" Rumi looks at Phil confused. 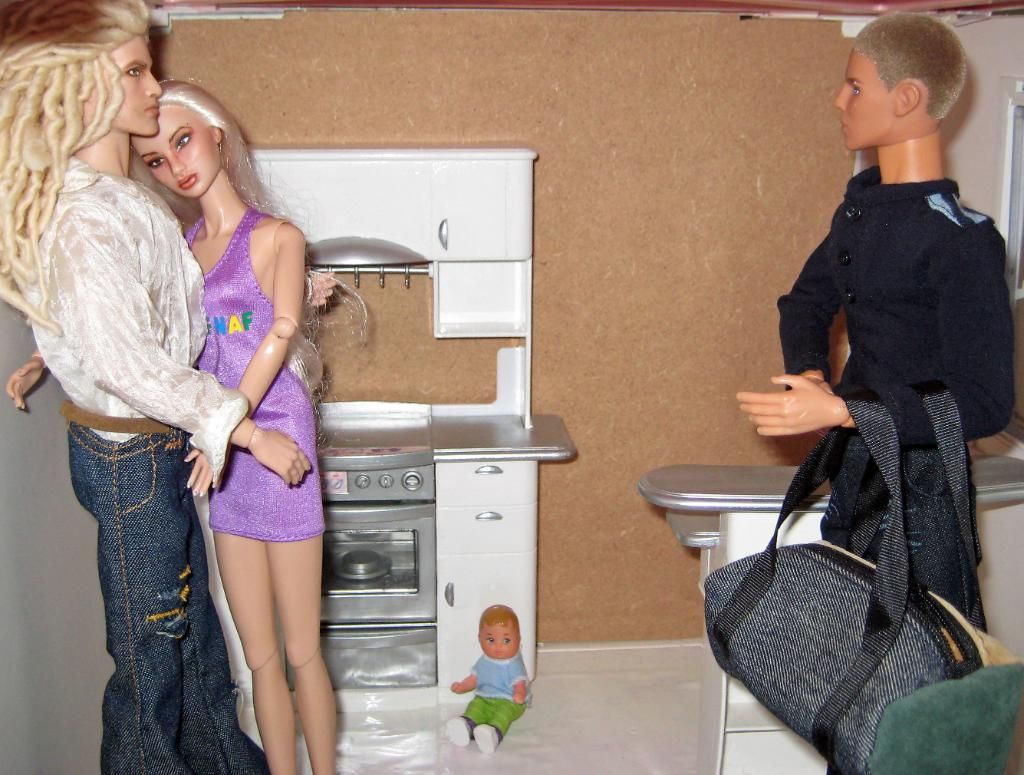 "All sorted through work! Nothing to sign!" Phil looks at his watch "Now, if you can excuse me I have to be going! Good luck have a nice life and so on!"and with that he picks up a bag and is out of the  fount door.

Rumi turns to Iver and smiles the biggest of smiles. "If Marc was not here I would get you on this floor right now a have my wicked way with you!"

Iver grins back at her "and if my son was not giving us some very funny looks I'd let you!"

"Weeeell, we could phone someone to look after Marc?" Iver offers up.

"TWIT! ..... although I can see the merits in that! I meant about the flat?" Rumi says playfully slapping Iver on his arm.

"Oh, OK! So can we save the other thought for later? As to the flat I guess we need to go back to your place and pack up your stuff. I'll make a couple of phone calls get a van" Iver pulls Rumi into his arms and kisses the tip of her nose.

" But.... but... what about furniture? I don't exactly have much?" Rumi starts to look a little crest fallen.

"Not a problem! I have some stuff in storage, we will soon have this place looking like home" Iver gives Rumi a hug and pats her on the bottom

"Storage? I still never quite get your set up? You don't seem to stay anywhere?" Rumi questions.

Iver turns to the window and looks out across the park "Hay, I think I can see Kandy's place from here?"

Rumi takes his arm and turns him around to face her "Don't change the subject! I think it's time you told me more about your work and where you've been and what you've been doing?"