"My baby? I can't here a cry...should she not be crying or something?" Sarah manages to say

There is an audible  sigh of relief around the room. The baby is wrapped in bubble wrap and whisked away

A doctor comes over to speak to Sarah

"Hello my names Dr Peters. You have a daughter! She's a little small and because of her dramatic birth we are going to take her to SCBU ...our Special Care Baby Unit. I understand from Dr Walsh that we will be moving you too in a few minutes! Do you have any questions?"

"Amm yes! About a million!!!!" Sarah manages a week smile

Just then a nurse appears "Dr Peters they need you in SCBU and Mrs Hage's sister is asking for information!"

"OK, tell Mrs Hage's sister she can see her when she's settled in her room. I'd better get to SCBU"

"Yes, doctor" The nurse leaves the room going to where Kandy is waiting just outside

"The doctor said you can see Mrs Hage when she's settled, it shouldn't be to long!"

"Mrs Hage is fine, the baby is a little small they've taken her to SCBU the doctor can give you more details!...Is Mr Hage on his way?" the nurse reassures Kandy. 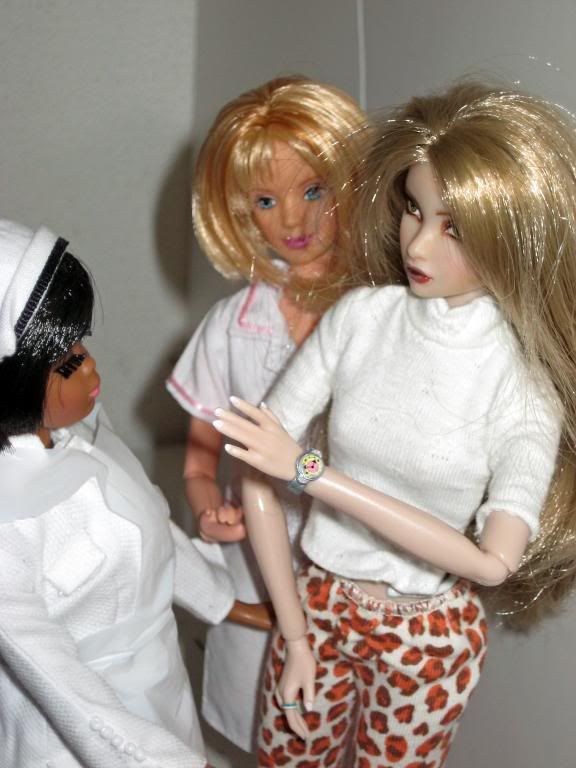 "A girl? Sarah has a daughter?...I'm an auntie again .....Oh, Neal ...Mr Hage? ...my boyfriend is collecting him from the airport. He should be here soon!" Kandy is a little incoherent.

"Neal! Hi, over here" Chris waves as Neal comes through the airport doors

Neal smiles and waves a slightly puzzled look on his face

"Hi Chris, what you doing here? I thought Sarah would be collecting me?" Neal asks Chris puzzled.

Neal's face goes ashen "What is it? what's the matter with her? Has she been in an accident?"

"WHAT? WHAT? what's the matter with her? Is it those stomach pains? I new there was more to it! What is it? appendicitis? gull stones? woman's troubles? Neal grabs Chris's arm.

"Well I guess you could say woman's troubles........." Chris shuffles his feet not quite knowing what to say....."she's having a baby"

Neal sways and then pulls himself together "WOAW there mate! Steady!" Chris puts out his hand to steady Neal

Neal looks at Chris totally incredulous "A baby? No, she lost our baby?" he says shaking his head

Now it was Chris's turn to look shocked "Sarah lost a baby? WOW! well she's having one now!"

Just then Chris's mobile (cell) rings. He takes it out of his pocket "It's Kandy" he says looking at Neal

By now Chris has driven out of the airport and they are just joining the motor way "We'll be with you soon, Kandy! Kiss Sarah for me and tell her I'm on my way!" Neal tells Kandy once he has retrieved the phone